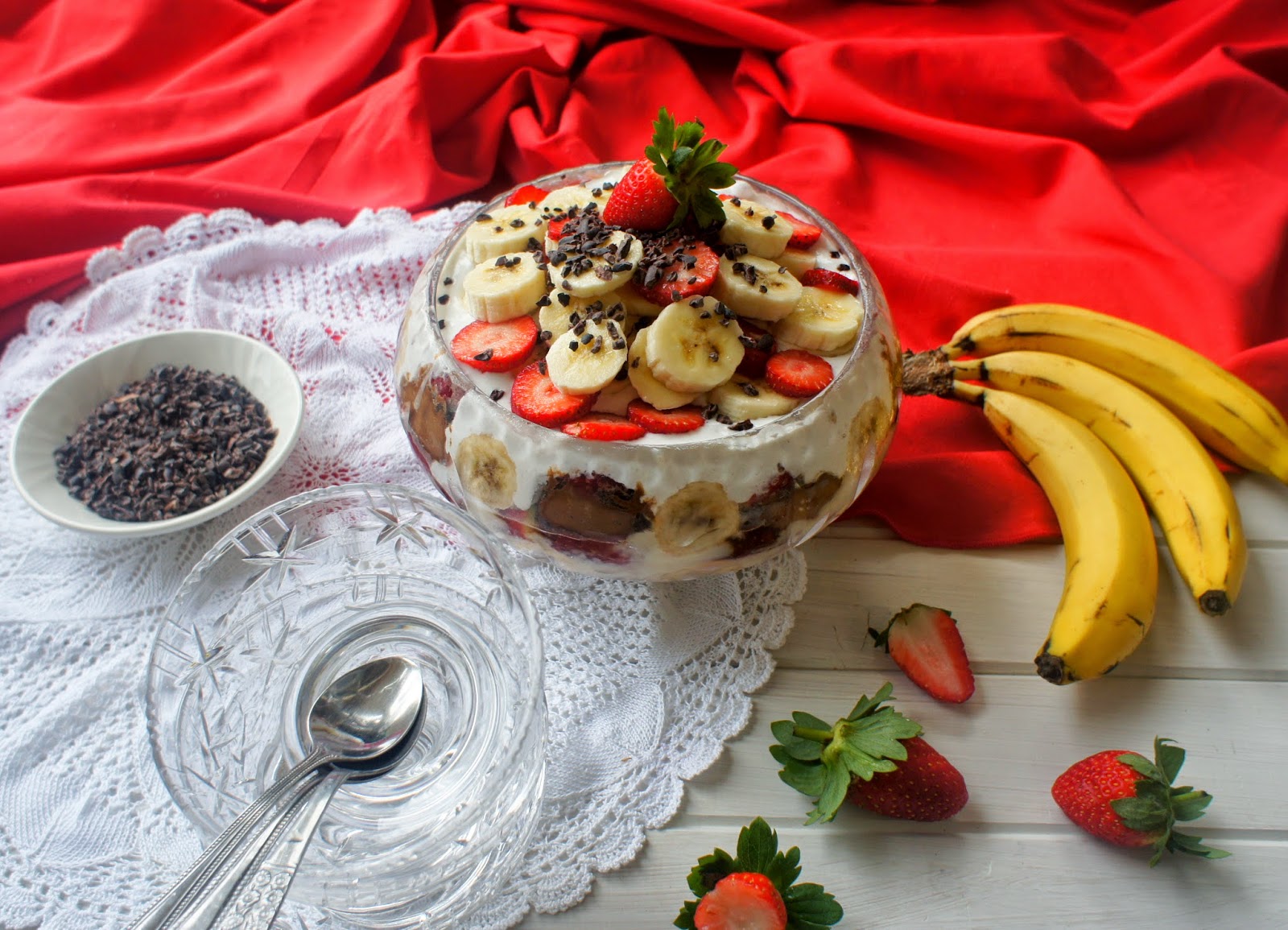 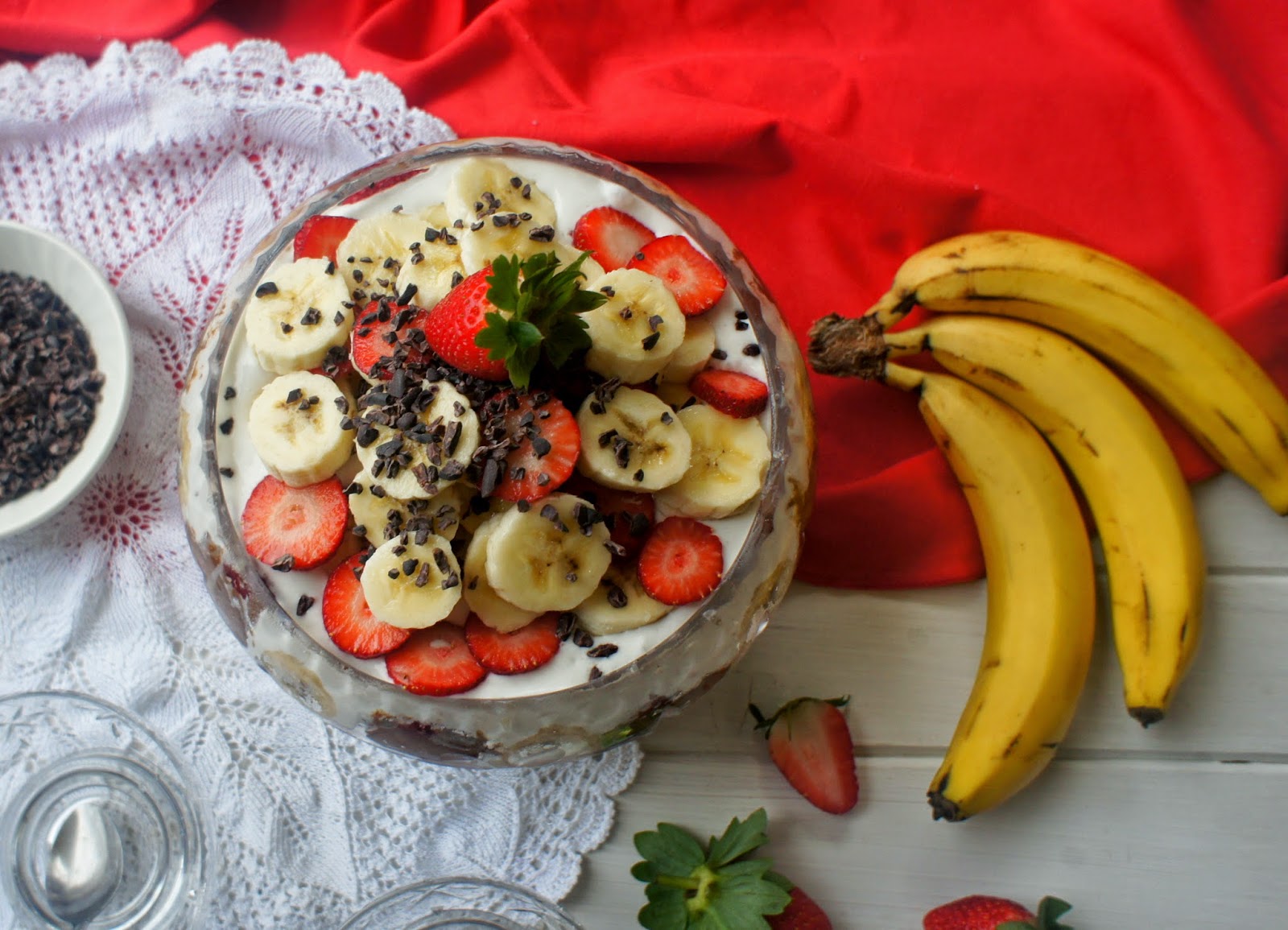 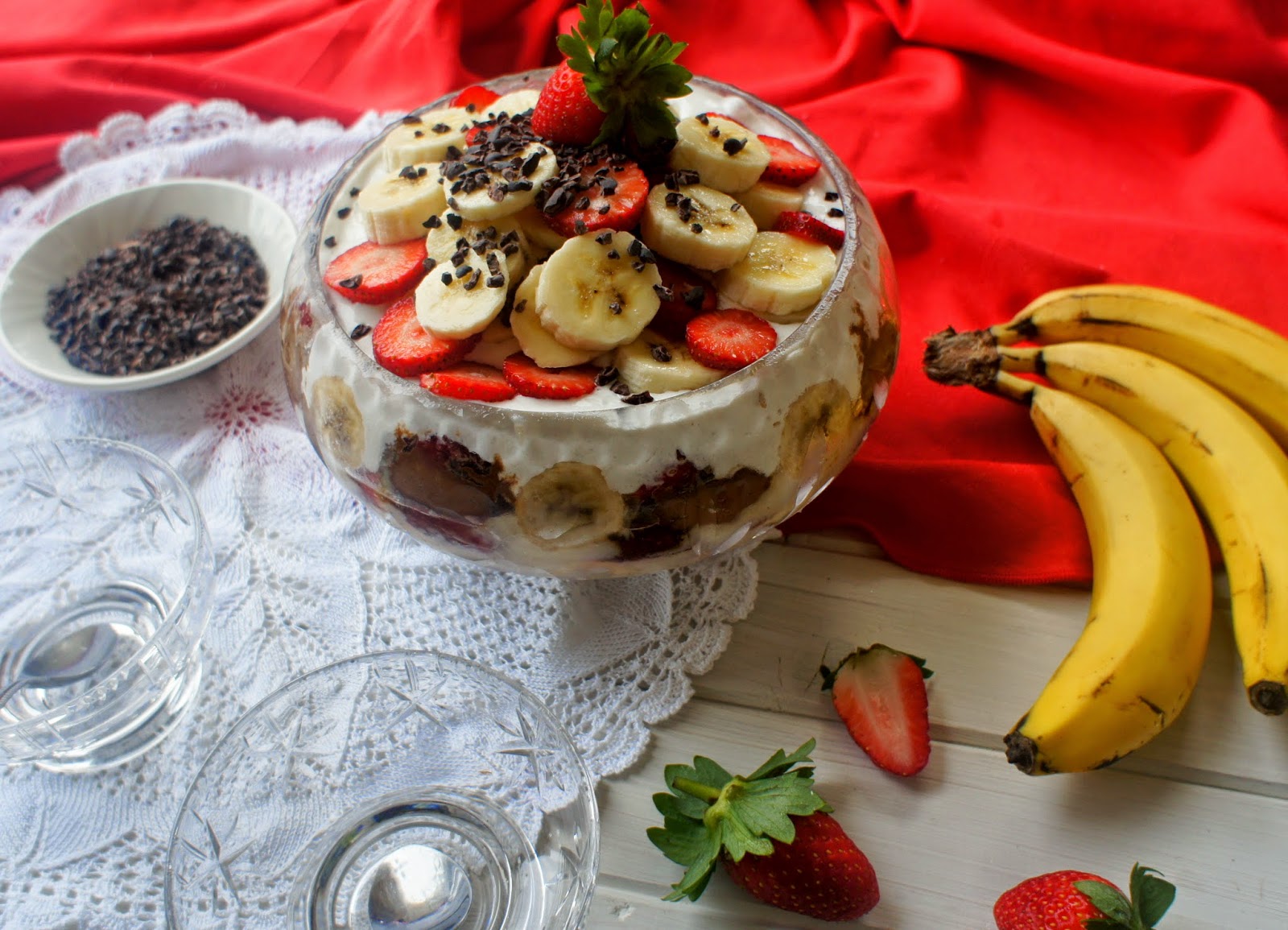 *Optional addition of 2 tbsp cacao powder, which I did not use but would have been fabulous (you will need to add an extra tbsp or so of milk) 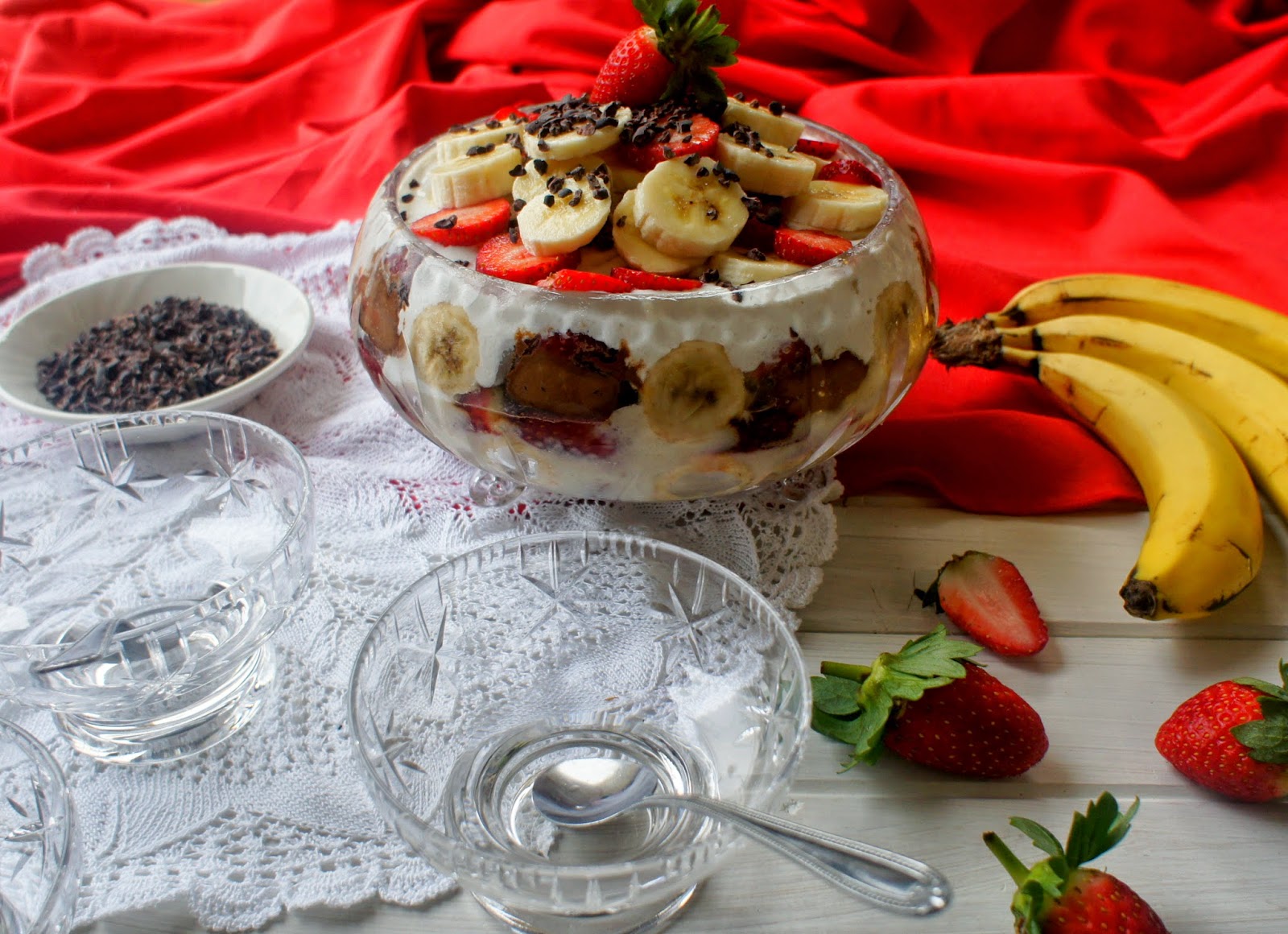 Method
In a large bowl, pour in your coconut cream and your sweetener and whisk well to combine. Cover the bowl and place in the freezer until overnight.
Preheat oven to 180 degrees Celsius fan forced. Whisk eggs in a small bowl, add milk and whisk again. Add in the rest of the wet ingredients and mix until well combined. In a separate medium bowl mix the rest of the ingredients very well, then pour in the wet and mix until well combined. Pour batter into a lined square cake tin (about 20cm by 20cm) and bake for about 15 minutes. Let cool completely in the pan then dice into cubes.

Slice your strawberries and bananas, so they are prepared.

At this point you should take out your coconut cream and place the bowl in the sink to thaw a bit. (***You only want it to thaw out enough that the cream has melted a bit around the edge and you can stab it with a fork and its soft enough to puncture.)

In a small saucepan, pour in your milk and mix well with a wooden spoon. Bring almost to the boil and take off the heat. Beat eggs with guar gum in a stainless steel bow. Pour in the milk and whisk well. Pour back into the pan and stir until thickened. The custard should coat the back of the spoon. Take off the heat add in cinnamon, mesquite and vanilla and leave to cool.

Arranging
In a glass bowl (I used 18cm diameter and 8cm tall) arrange half of your bread cubes in the base, and pour over half your milk to soak. Arrange pieces of banana and strawberry around the edge of the glass on top of the bread layer. Then pour half your custard evenly over the banana bread, the fruit stuck to the glass should still be visible. Next, arrange a layer of strawberries lengthways vertical across the glass, then, scatter pieces in the centre of the bowl. Place half tbsp blobs of avocado mousse around the edge of the glass, placing banana coins in between, and then blobbing the rest in the centre of the bowl. Next, create another layer of banana bread and our over the rest of the milk and then custard. Add another layer of strawberries and bananas around the edge of the glass. In a food processor, add the coconut cream (when it has thawed out as noted ***) and pulse a number of times until creamy but still very thick. Scoop the ice cream on top to fill the rest of the trifle bowl. Top with banana, strawberries and cacao nibs. Of course, this was how I layered my trifle, but by all means be creative and layer it however you please. Serve straight away so the ice cream doesn't melt (but I also love it when the coconut ice cream melts into a mousse). Then watch your happy guest's faces as they demolish this and reward you with huge hugs!

****This recipe as you can see is not vegan, but if you are really desperate to try this recipe and you are in fact vegan, you could swap the eggs in the banana bread for flax eggs and extra oil (have not tried this but I’m sure it would work) and instead of this custard you could make one out of 2 packets of soft silken tofu, 500 ml (rice/soy/coconut/almond) milk, 2-3 tbsp sweetener, cinnamon and mesquite powder. This recipe is gluten, dairy grain and refined sugar free and paleo.